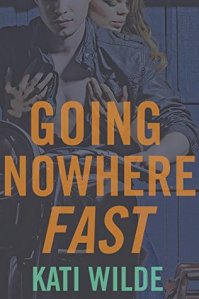 BLURB: The brakes are off in this sizzling-hot new adult romance from the author of the Hellfire Riders MC Romance series…

One promise.
Two hearts.
Three rules.
Four weeks to break them all.

When Aspen Phillips’ best friend invites her on a month-long road trip, she has serious mixed feelings. Sharing their tight quarters will be Bramwell Gage, overprotective brother and all-around jerk. Bram may be ridiculously sexy, but he’s made no effort to hide how he feels about Aspen—that she’s trash who’s no good for his sister. But Aspen is determined to get along with the uptight millionaire—and to keep her promise, concealing a secret about his sister that Bram can never know.

But after a scorching kiss reveals that Bram’s feelings toward her run much hotter than she believed, Aspen’s emotions swerve into a complete 180. Suddenly the girl who has nothing has everything—but only as long as the truth about his sister remains hidden. Because when all the secrets and promises unravel, she risks losing it all…

Ok this one frustrated me. so my rating sort of waffles between 3.5 and 4. Up until about 70/80ish % i was sure it’s be 4 because i was loving Aspen and her not taking shit from Bram attitude. And whoo! not gonna lie the sex was hottttt. their on page chemistry and the tension between them was sizzling, almost off the page.

But…my frustrations lay with Bram. Jesus he was a jerk. I mean i ge this frustrations ove rhow he felt about Aspen but thennnn even after they got together and are in love he just kept spewing awful tings at her. Even if he has his own hang ups the way he blew up at Aspen for keeping a promise to his sister about checking into rehab was ridiculous. He basically made it all about himself instead of showing support for his sis. Plus he takes all that out on Aspen??? Come on man.

And wow his sister was no better. Your best friend covers for you this entire time and it isnt even her fault your secret is out (hell Aspen even takes the fall for that when it’s Bram;s best friend who sorta spills the beans) and you basically call her a whore??/ like…what? Both Bethany and Bram pissed me off in those moments.

So i never ended up liking Bram at all. to me he remained basically a jerk to the end. Even though he saved Aspen from a situation that was taking a turn for the worst at the end there. I just couldnt like him for repeatedly hurting her like that.

So while i loved her character and their chemistry…the other half of this duo just left me annoyed, sadly.

I am intrigued by Murphy, though. One niggle about Murphy. it seemed implied that he was a MOC? based off a joke he made re: something Aspen said being racist but he’s barely described, at all. We just know he’s a big dude, with low black hair? He’s around the latter half of the book and we hardly get any description of him? That was just odd and if he was a MOC he should have at least been described as much as the other characters who were white.

I loved the author’s writing style (this was my first book of hers) and I’ll be interested in reading more of her books, especiallyyy if Murphy get a story. I was sorta shipping him with Bethany sooo…;)