“I’m a flight risk, I dress inappropriately, and I’m ten scandals waiting to happen. I threw up on a vintage Chanel dress just the other night. I’m a PR nightmare.” 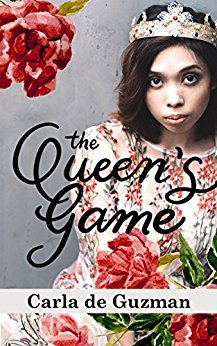 BLURB: There are only two reasons why Nina would come back home to Cincamarre–one, if Auntie Delia promises to stop butting into her business, two, if her father died and she was made to ascend the throne to be queen.

Unfortunately for her, it was the second thing that brought her home.

As a princess who’s sunk a yacht and been caught kissing popstars, it’s easy for her aunt, the regent, to think she’s ill prepared for the throne. But Nina doesn’t think that having to fake date Felipe, the handsome, squeaky clean Prince of Concordia was the best solution for that.

Nina’s ready to learn the ropes of her new role and make it hers, and reconnecting with Felipe only makes her want to be a better queen. But is the monarchy ready for Queen Nina?

So first off that cover? So lovely.

Second thing. I think this is my first contemporary romance with royals. Pretty sure it is. and I really loved it.

But also Tito Ernie was hilarious and I adored him. Would love him to find an HEA too 😉

Nina and Felipe are the perfect foils for reals, but they worked so well. Felipe’s love of farming and his klutziness made him so charming. Nina’s devil may care way about her, excellent! Seriously this boy was so clumsy…

Little did they know, he was a huge dork who, aside from twisting his ankle in an orchard, had gotten cut by a pair of giant scissors, and pulled a muscle during a workout and loved to sing.

Which just made him so endearing to me. My fave thing is that Felipe accepts Nina for who she is. She is who she is and Felipe adores her all the same YESSSS!

He didn’t think she needed him to fix her reputation at all.

He’s so proud of them and the scene where they’re there and…i loved this because my dad grew sunflowers in our front yard and people kept stopping to check them out lol. so i was grinning when i saw this was the thing he had to show Nina.

The smash and grab so very fun and an awesome ride packed into this novella. I want so much more of them