Feels Like Summer is the second book in the Summer Storm series but the author did confirm this one can be read as a standalone so review tiiiime here we goooooo:

Right off i loved Jett and the Arabella band boys. They all had these very different personalities and yet meshed so well. Adrian my adorable son, Franklin i don’t even know what to say about this guy he was pretty funny, Michael Brian (and his legendary abs) *praise hand emoji* lol, Kenny who shockingly had more pull as an intern than expected. All the guys so fun.

I loved how Jett just fit right in with them. It was like she was an honorary member, who sometimes (ok a lot the times) ogled MB’s abs lol. Exhibit A:

Adrian didn’t level up to Michael Brian abs, but I could feel his muscles clenching beneath his smooth skin. I’m definitely into Michael Brian’s abs, all day every day. I didn’t know I’d be so much more into this, but noted. With thanks.

Jett is such a well crafted character. She’s not about this feelings and relationships life (we learn why later on…glares at Ziggy >.>), and is just about the hook-up. So here’s Jett being Adrian’s rebound girl and being all you better not catch feelings this isn’t what this is about. She even goes so far as to tell Adrian their 3 month deal is just a way for him to work his ex out of his system so he can find another girl (right Jett sure. lol)

“His laugh tickles my ear. It’s nearly as melodic as his singing. How is this fair to any human on this planet?”

Jett stood no chance, sorry Jett you didn’t. There was so much great banter between Adrian and Jett, i swear i just wanted to highlight eveythiiiiing. Excellent banter is my number 1 weakness! There were just so many great scenes between Jett and Adrian, especially this one that had me cackling. Jett breaks out a glow in the dark condom and omg LOL

“You sure this isn’t toxic?”

“Sure.” I kiss his lips. Must not laugh. Why is he being cute at a time like this? “Says so on the label.”

He sighs, but leans back and steadies himself with his hands.“ You know this isn’t going to go unpunished, right?” He does this now, tease. I taught him that, I like to think. Gave him explicit permission to, anyway.

His head falls back, exposing his neck and I kiss him there. “I’m looking forward to it. Are you going to use the force on me?”

He grabs my arms and I giggle and wiggle my way out, but he has me locked in tight. “Is nothing sacred to you?” he laughs.

“No. You’re not ruining this for me. That is sacrilegious.”

And now…onto *narrows eyes* Ziggy. This guy was the worst and i wanted to punch him the entire time and i hope i never see him appearing again ever i hate him omg. He was awful to Jett, just plain awful. I’m so glad she finally got her closure with him cuz >.> (i hate him)

Waking up to the realization that I get nothing out of this parasitic relationship was one of my better days. Getting out of it is a work in progress.

Now that i got that out of my system. This was such a fun read, even with the seriousness of Jett trying to get Ziggy out of her life cuz he was sooo toxic. Adrian and Jett together were great. Jett together with the band guys was gold! There’s this scene where Franklin gives Jett several nicknames which are just puns of her name and it is the greatest thing.

Oh! one more thing to note. In the beginning the boys get Jett to pretend to be Adrian’s girlfriend cuz of his supposed “Evil Ex Ellie” but even though the guys call her evil cuz she apparently broke their fearless leader’s heart, not once does Jett ever think of Ellie as the enemy and in fact Ellie helps Jett make her grand gesture at the end to win Adrian back, so i just really liked that the two girls were not pitted against each other 🙂

So if you like beach festivals, boy bands and beautiful abs grab this one 😛 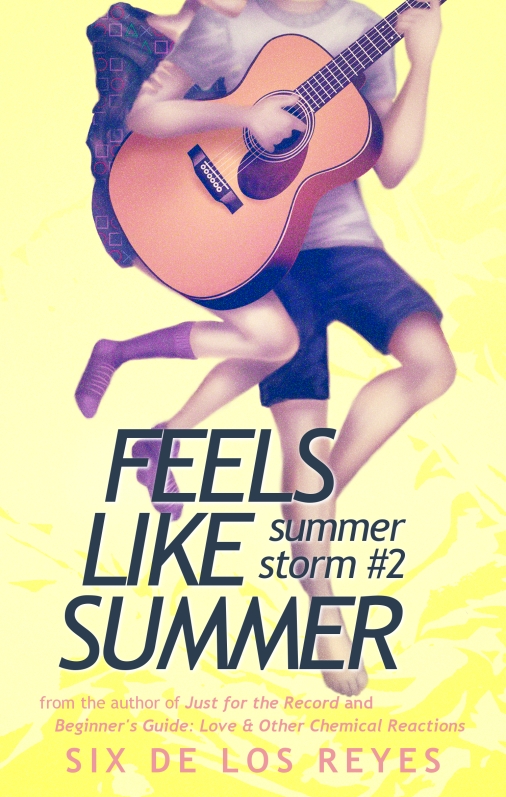 and the full print cover ! so prettyyyyyy

Six de los Reyes has been reading and making up stories for as far as she can remember. In fifth grade, she learned to write about the stories she wanted to read. As a pretend grownup, she writes contemporary romance novels. Her day job doing science has something to do with being a part-time mermaid and a part-time labrat. She currently lives next to the sea.

Just for the Record

After the Moment, Taking Chances (#BuqoYA)